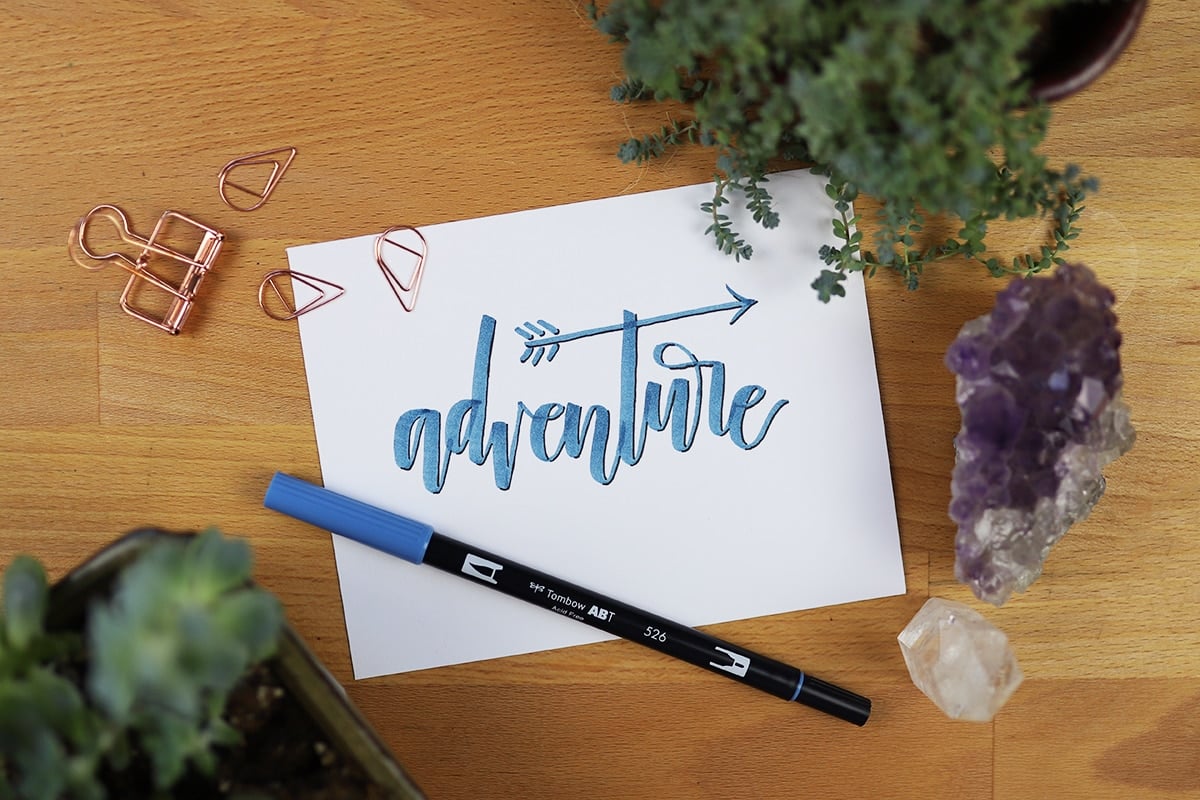 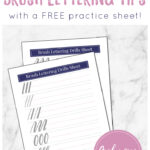 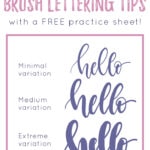 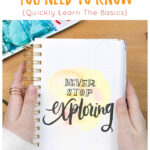 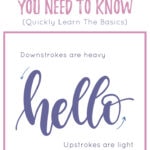 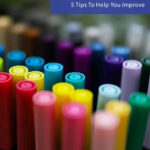 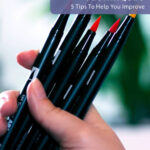 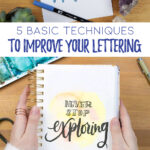 When you’re new to brush lettering and full of excitement, you are ready to jump right in and begin. But once you put your brush pen to paper for the first time, you’ll realize that this is harder than it looks. Brush pens are hard to control, your hand isn’t doing the right movements, and it’s just not turning out like you hoped. This can be super frustrating. So how do you get past it? After lettering for many years now, I’ve come to realize that there are a few techniques that can help you overcome these obstacles and get to lettering the way you want. Here are my top brush lettering tips to get you on the road to lettering success and improve your lettering quickly.

Before I get into the techniques, I need to talk turkey about the pens. You can’t do brush lettering with any old pen – it must be a brush lettering pen (although you can create a faux lettering look with whatever you have on hand). There are a bunch of brush pens out on the market, but I started where lots of people start – the Tombow Dual Brush Pens. I like these because they are reasonably priced and come in enough colors to keep me busy for a while. I also love the fact that they don’t bleed through the paper of my Leuchtturm. There’s a little bit of ghosting, but it’s really quite subtle. That’s a huge plus for me.

These Tombows are a great first set, but there are tons of other options. Each pen has its own feel, personality, and abilities. You might be surprised which pen becomes your favorite. Here is a post to help you find the brush pens that are right for you.

The first thing you need to know is that pressure changes everything in brush lettering. When you apply pressure at the right points, you can create a beautiful, flowing piece of lettering art. Brush pens make this possible with a single stroke. Since they have flexible nibs, you can create heavy and light lines in the same stroke to achieve this look.

A normal pen, however, can’t achieve line weight variation easily. If you go over your lettering again and manually thicken up the lines like in faux calligraphy, you can still create some line variation. But a brush pen, once you learn how to control it, can do it much faster and more intuitively.

Lettering that has no variation in line weight is called monoline lettering. This is a great type of hand lettering, but it isn’t what we’re trying to achieve in brush lettering. So you need to understand how to use pressure to your advantage while lettering.

The Ups and Downs

Ok, so you understand that you need to apply pressure in your lettering. But how do you know where to apply more pressure or less? Thankfully, there is one simple rule that will help you kick your lettering into the next gear.

Now I will admit that this is easier said than done. Brush pens are very foreign and strange to write with at first. They might not always do what you want them to do because they are so different from anything else you’ve ever written with. But with time and practice, you will figure out your brush pens and know how to bend them to your will.

The best way to get the hang of heavy downstrokes and light upstrokes is to practice slowly and deliberately. Drills like the ones I have for free in my Fox Den Resource Library are an excellent way to practice applying the pressure in the right places. Sign up here to get it now!

Here’s how you use it: download your worksheet and print it out. Then use a brush pen and slowly letter over the guides. Just once won’t do it — in fact, drills are perfect warmups before you sit down to letter anything.

As you’re practicing your upstrokes and downstrokes, it is important to try for a clean transition between two weights. This is a tough thing for newbies to learn, but it’s important to having a great lettering product. One of the tells of a new letterer is a sloppy transition between thick and thin. Make sure as you practice to go slowly and work on creating a clean break between the two strokes. It will be hard at first, but if you focus on this detail, you will grow your skill by leaps and bounds.

Play with the pressure

Once you start to get used to applying pressure in the right places, you’ll see huge improvements in your lettering. But there’s more to it! You can change the thickness of heavy downstrokes to completely change up the style of your lettering. You can make the weight difference small or gigantic for a totally different effect. Try playing around with the amount of pressure and see what kind of lettering you create!

The world of brush lettering has a ton of techniques and tips to learn. But once you master this foundational set of brush lettering techniques, everything you make will look much more advanced. Focusing on these techniques might not be as glamorous as learning fun flourishes or shading, but getting these details ironed out will have a huge impact on the rest of your lettering skills. So practice, experiment, and work on these skills. I promise that if you throw yourself at mastering pressure, the rest of the lettering world will open up to you. 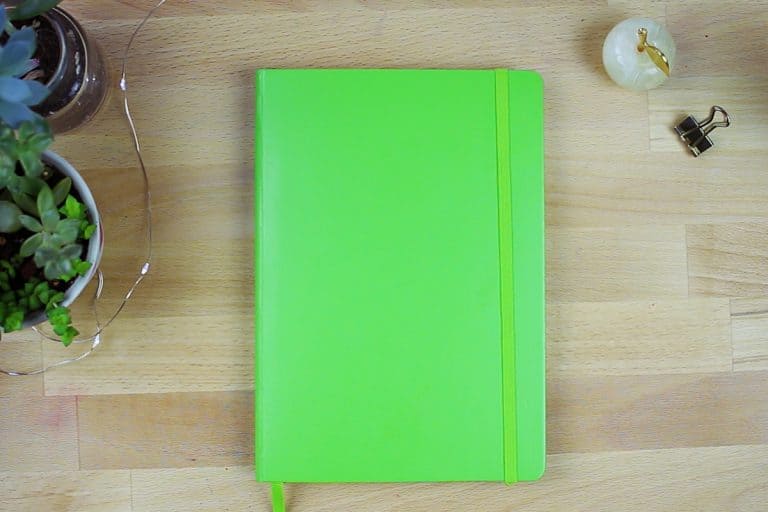 Off to a Great Start We’re just about two weeks into the year, and already it’s been incredible. I can largely attribute that to my 2018 bullet journal set up! I managed to get all my ducks in a row before January first, which is probably the first time that’s happened in my whole life. Back… 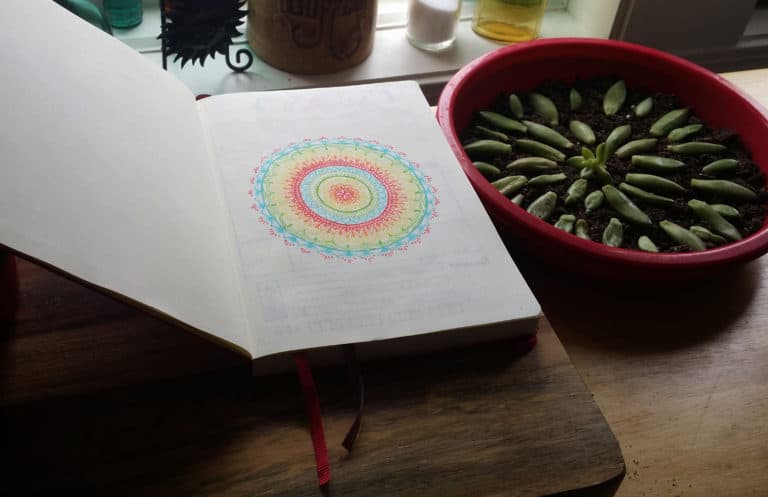 The first page of a journal is always so tough for me. It feels monumental, the beginning of the theme of the whole journal, the first stroke of an era! A few years ago, I would stare at this page for weeks before I would finally get the nerve to make the first mark. While… 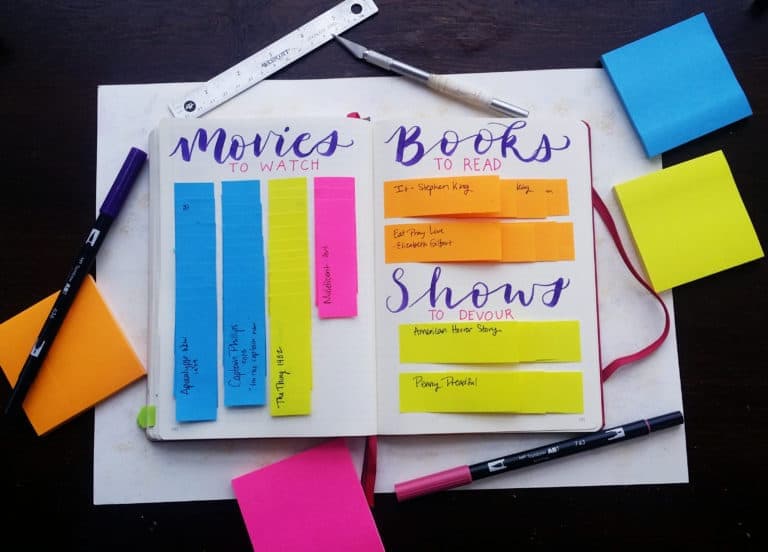 I love to try new things in entertainment, but it’s so easy to forget options! This show tracker is just the solution I need for shows, books, and movies! You May Also Like: THE ULTIMATE BULLET JOURNAL GUIDE FOR BEGINNERS What Should We Watch Next? I am someone who tends to forget things – a lot…. 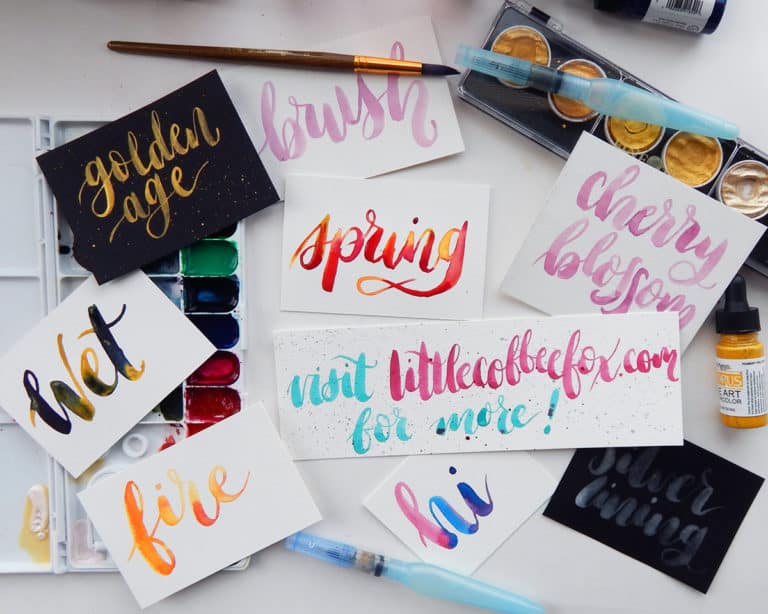 A Match Made in Heaven If you know me at all, you know that I’m a sucker for watercolor. It’s free, expressive, unpredictable, and creates completely unique effects. And brush lettering is one of my favorite hobbies, being that it’s so easy to pick up and totally addictive. And you know what’s even cooler than either… 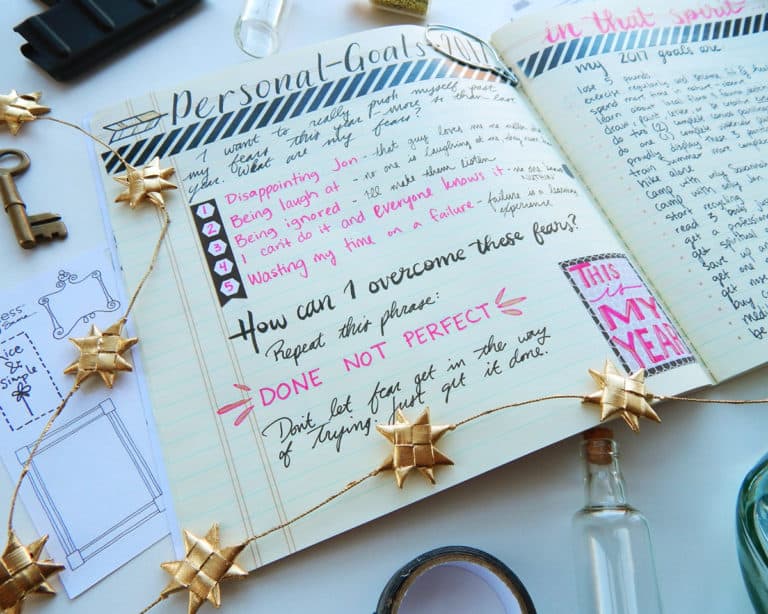 Setting the Tone Beginning a new year, lots of people want to take steps toward their ideal selves. I am no different, and it is hard not to view the turning of the calendar as an opportunity to start fresh. But this year, I’m trying something a little different. I want to pick one single… 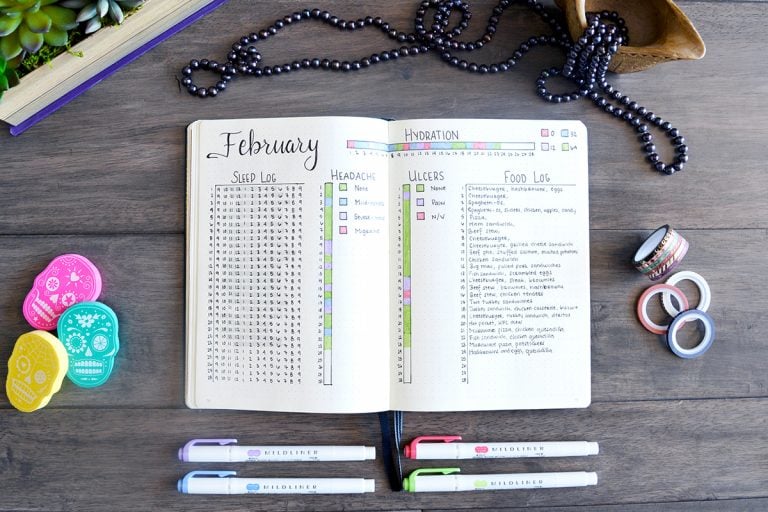 Using Bullet Journal health trackers allows you to easily see the patterns in your daily life. Check out my favorite health trackers, and start tracking! You May Also Like: LOVE YOURSELF FIRST – BULLET JOURNAL SELF-CARE SPREADS Are You in Control of Your Health? If you look around the world today, it’s easy to see… 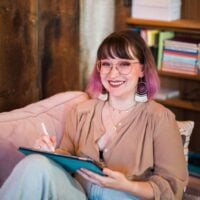